Mathew and Sara met in 2004, working on the set of Brokeback Mountain and have been together ever since.  In 2011, Mathew and Sara started Studio Seven7 Films, a dynamic reality, scripted television, documentary and film production company based in Rhode Island.  Mathew and Sara welcomed their first child, Sofia in 2011. 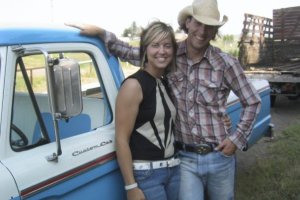 Mathew Provost – Producer / Director
Originally from Calgary, Canada – Mathew has worked in the film industry for the past 15 years across Canada and the United States.  Credits include; The Lazarus Child, What Just Happened, The Women, The Clique, Comanche Moon and Brokeback Mountain.

Sara Ossana – Producer / Director
Originally from Tucson, Arizona – In addition to film, Sara is also the founder of O&G Studio.  Launched in 2009, O&G Studio is hardly your typical furniture company–its colorful, post-industrial pieces have been featured by the likes of The Wall Street Journal, Martha Stewart Living Magazine, and The New York Observer.